The goals of the Arana Gulch Master Plan serve to enhance resource protection and public access. Though, as any local, state, or national park agency can attest, this can be a challenging task and there is often community debate.  Although people may not all agree on the types and level of public use, community debate does reflect how passionately people care about open space.

The City of Santa Cruz has devoted much time and expense working closely with botanists and other technical specialists to prepare a Master Plan which will ensure protection of sensitive habitat and provide a prudent level of public use. The Master Plan before you today has significantly less public use than was originally proposed in the earliest concepts for Arana Gulch. This project is a balance between public access and resource protection of an environmentally sensitive habitat area (ESHA).

Currently, this greenbelt open space that is situated in the middle of an urban environment is off limits to many people. The New trail system will protect sensitive habitat.

Over 90% of the property will be
protected as sensitive habitat
with no public access at all.

Prudent level of public use

Public access will focus on scenic overlooks and interpretive displays. The 34-acre Coastal Prairie/Tarplant Management Area will feature new multi-use trails and a pedestrian loop trail, which presently exists. Interpretive displays will educate the public about the tarplant and management actions.

﻿﻿﻿﻿Ranch roads, cattle trails, and volunteer pathways have long existed between and through the tarplant population areas. Providing a clearly marked trail system will enable the City to permanently close the existing undesignated trails. The City has worked closely with botanists to ensure the proposed trail system will protect the viability of the Santa Cruz tarplant habitat.


The all weather surface trails will also discourage visitors from trampling vegetation and widening dirt pathways to avoid muddy conditions during the rainy season. The trail system will enable a broader range of visitors to experience Arana Gulch and learn about the unique resources.

The new west entrance and Hagemann Gulch Bridge will also expand public access by providing a convenient new connection for residents of Santa Cruz. Most residents of the City live to the west of Arana Gulch, which presently has no access along the entire western boundary. 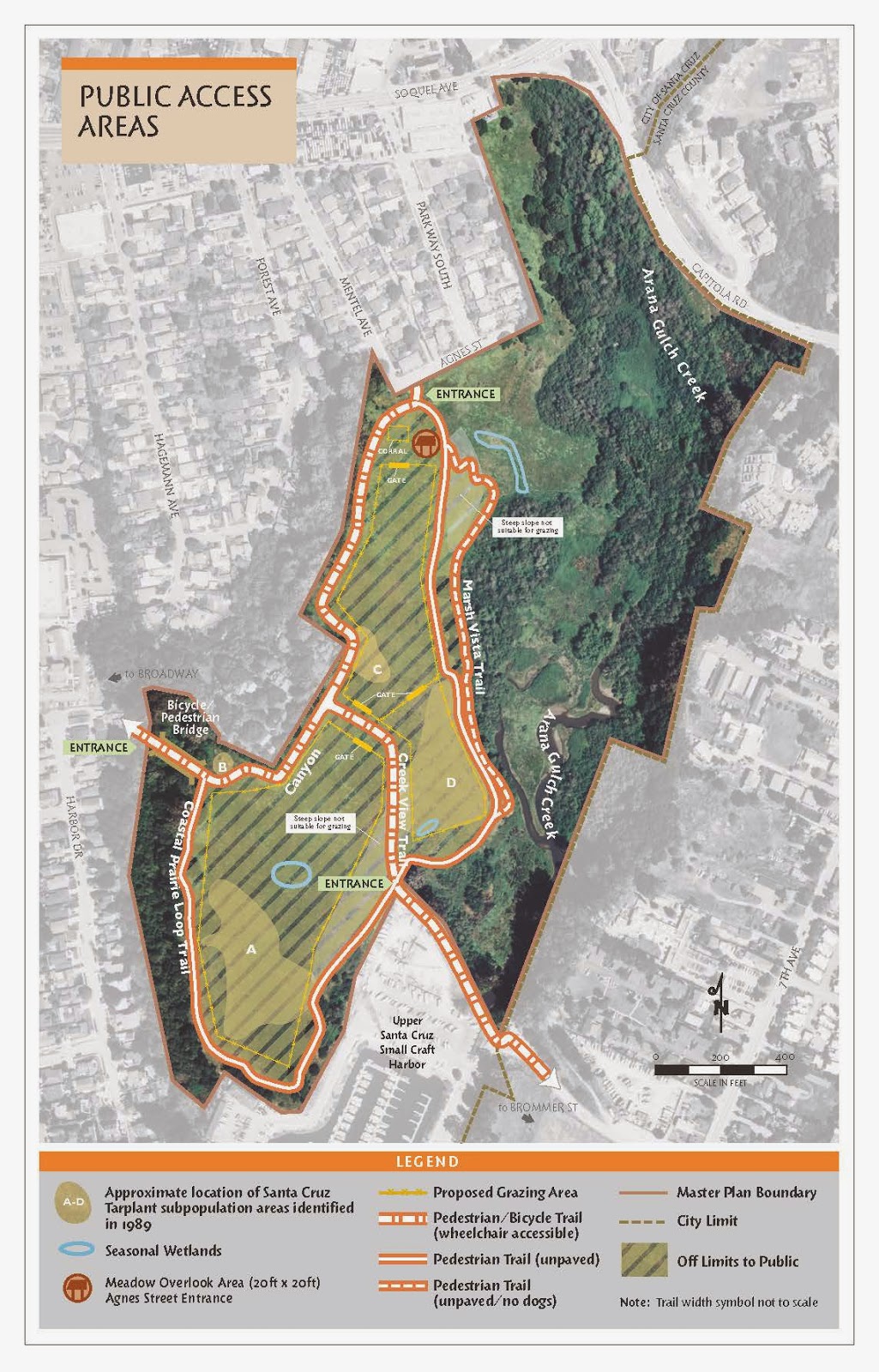 Through experience, park managers have learned that expanding legitimate public access is a deterrent to illegal activities that can occur in open space within urbanized areas. More eyes on the trails make open space safer for everyone. The new multi-use trails will  greatly improve access from neighborhoods to the coast in conjunction with the Monterey Bay Sanctuary Scenic Trail and California Coastal Trail systems.

The City currently manages three successful grazing operations for the purpose of Coastal Terrace Prairie and other habitat enhancement in our open space parks and greenbelt areas. This narrative describes an expanded cattle grazing program which is compatible with the multi-use east-west trail route as proposed in the Arana Gulch Master Plan.

The primary purpose of cattle grazing at Arana Gulch is to enhance the tarplant (Holocarpha macradenia) population.  Recent research, as well as discussions of the Santa Cruz Tarplant Working Group, found that for many tarplant sites supporting a dense growth of non-native grasses, a cattle grazing management strategy is likely the most effective management tool for species recovery and management. 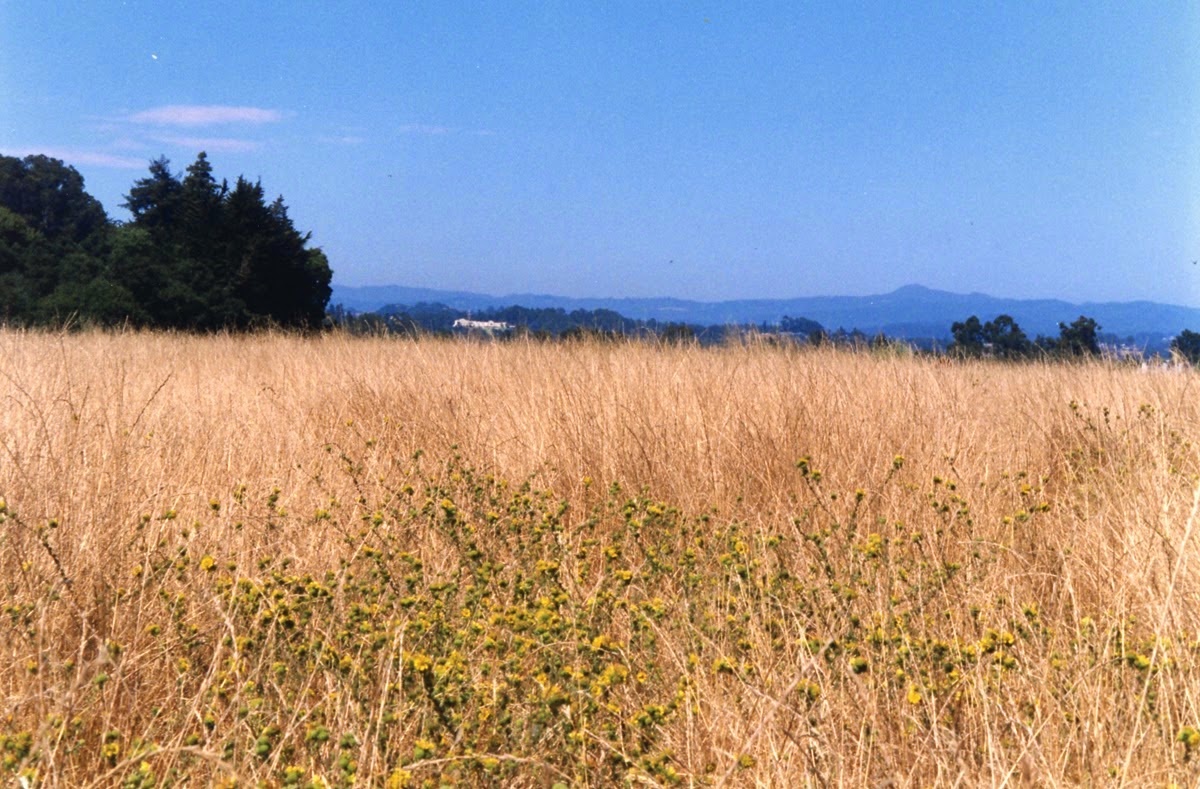 
The cattle grazing proposed as part of this Coastal Development Permit would be of significantly lower intensity than occurred historically, and as recently as the 1980s. It is anticipated that a range of approximately 2 to 6 cow/calf pairs would be grazed from approximately January through June initially, with the potential for longer periods as recommended by botanists. The grazing area would not include any riparian habitat.

Initially the cows will be grazed from approximately January through June. Cattle will be kept on site until the tarplant flowers, which is typically mid-June. Removing the cattle at this time would prevent cattle from crushing blooming plants. Should the tarplant population increase in future years, an extended grazing period may be recommended by the botanists. The exact grazing schedule each year would depend on specific weather conditions and the flowering period of the tarplant.